Scope of Organic Farming in Pakistan 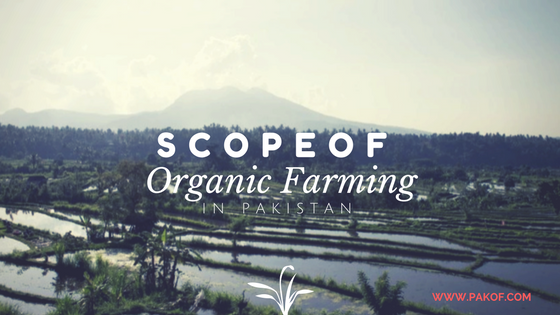 IFOAM published a report in which it highlighted that the region under certified organic farming in Pakistan is only 0.1% in total organic farms in the world. Pakistan hasn’t contributed much when compared with rest of the world. However, the report did point out that the land under organic farming has been expanding with the timeframe (IFOAM, 2018). As per farming experts, Pakistan is likely to lose worldwide markets because of high standards of check and balance, imposed by World Trade Organization (WTO). Nonetheless, Pakistan can capture India’s $260 million rice business with the European Union following the EU’s zero tolerance on Tricyclazole chemical found in Indian grains (Abduhu, 2017). Now, it’s the right moment for Pakistani rice exporters and farmers to acquaint themselves with Good Agricultural Practices in accordance with International models.

The word “organic” mostly relates to the making of foodstuff without the usage of artificial or synthetic chemicals.  Though, there is no generally acknowledged definition of organic farming, but most believe it to be a precise production structure which targets to evade the addition of man-made chemicals, growth regulators, livestock feed additives and dangerous pesticides. According to USDA, farmers that incorporate farming techniques which seek to avoid man-made chemicals and preserve the environment are considered organic farmers.

The fundamental reasons farmers state for needing to cultivate naturally are their anxieties for the earth and about working with farming chemicals in conventional farming frameworks. There is also an issue with the measure of strength utilized as a part of agribusiness, since numerous farming chemicals require serious assembling forms that depend vigorously on non-renewable energy sources. Organic farmers observe their technique for cultivating to be lucrative and specifically rewarding.

The requirement for organic food items rose as a reaction to a move towards the utilization of engineered pesticides and manures following the approach of industrialized horticulture in the 1900s. The extra introduction of anti-toxins, genetically modified organism and development hormones in food also drove up the interest for organic cultivating. In 2015, there were more than 50 million hectares of organic cultivating territories around the world.

Organic farming area worldwide from 2000 to 2015 (in million hectares)

The European Parliament published a report, titled ‘Human Health Implications of Organic Food and Organic Agriculture’, which highlighted the multiple benefits of consuming organic food. The latest figures for organic sector show that 50.9 mn hectares of certified organic agricultural land and the organic market is worth over US $80 bn (IFOAM, 2016). 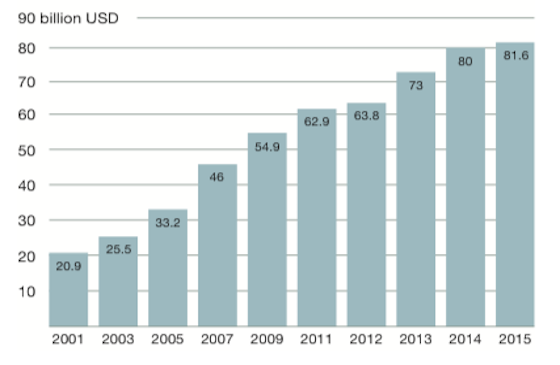 According to Statista (2018), in the United States, there is an expanding interest for organic food. Demand of organic food in the U.S. encountered a 10.6 percent growth in 2015 alone. Around the same time, the U.S. organic food showcase created the most astounding measure of income worldwide with deals totalling 35.78 billion euros. Organic food stores in the U.S. also keep on capturing a critical sale in the market for goods. A portion of the main U.S. organic food stores include: Wild Oats Fairway, Trader Joe’s, LifeSource Natural Foods, and Kimberton Whole Foods. Organic farming items in the U.S. are named as “certified organic” as per determination guidelines set up by the United States Department of Agriculture (USDA).

The following distinct elements added to the establishing of organic farming. Rudolf Steiner conveyed a progression of eight addresses to a gathering of farmers in Austria in 1924.These addresses characterized biodynamic agribusiness and the Demeter image was made in 1927 to recognize food developed by these techniques.

Lady Eve Balfour was motivated by Sir Albert Howard (on fertilizing the soil and rural wellbeing) and Sir Robert McCarrison (on eating routine and human wellbeing), both working in India. She began the Haughley Experiment on her ranch in Suffolk inquiring about the connections between the strength of soil, plants and creatures inside various frameworks. In light of this work she composed The Living Soil in 1943 (Soil Association, 2016).

In 1972 Lady Eve Balfour, JI Rodale and various others shaped the International Federation of Organic Agriculture Movements (IFOAM), perceiving the global idea of organic farming. Their point was to unite the different developments and to share data crosswise over dialect, social and geographic limits. It delivered its first ‘essential’ norms (for data and training) in 1980.

Organic and sustainable don’t mean the same thing. Chait (2018) pointed out that USDA, National Organic Program, don’t cover the highest standards in sustainable farming techniques. Besides, there are no severe policies to make sure that organic food production or organic farmers follow bio-minded methods.

The author explained the major differences between certified organic food and sustainable food. For example, sustainable organic farming is off the record but measurable and observable through social benefits and economic benefits for the society and environment.  Besides, sustainable processing and farming systems do attempt to preserve water. Whereas, National Organic Program policy doesn’t mandate that farmers or processors try to preserve water resources. Further, sustainable farming is more energy efficient. The sustainable system relies on alternative power resources such as hydro power, solar and wind. In short, real sustainability covers beyond simple farming objectives into lifestyle choices and management objectives.